A journey to the Aeolian Islands

“When I burn this coal, to manufacture sodium, the smoke rising from this mountain’s crater makes it look as if the volcano is still alive” – Captain Nemo”

Since almost two centuries, Jules Verne inspires one’s imagination. So he did mine. One of my all time favourite novels was (and probably still is) called: “The Mysterious Island” originally published in 1874 and filmed 1973/74 with Omar Sharif as Captain Nemo. It is as a 300 min European TV mini series production. This TV miniseries turned out to be one of the most remarkable Jules Verne adaptations. And it’s all about a small volcano island, Captain Nemo’s home base, where he ended up hiding from the world with his submarine, the Nautilus. 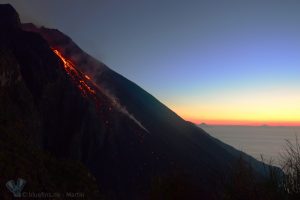 Wouldn’t it be cool to touch, feel, hear and smell such a volcano one time in your life? No? Why? Too scary? So how about if it would be a volcano, which isn’t dangerous? A romantic volcano! A fire spitting mountain, on which you can sit with a bottle of wine, watching glowing lava streams and fire crackling. With sparking stones jumping up like fireworks. All this without having to fear a thing of being blast away? You think there isn’t such a place on our planet? Well – there is! Stromboli Island, South Italy.

Stromboli is a small island in the Tyrrhenian Sea, off the north coast of Sicily, containing one of the three most active volcanoes in Italy. It is one of the eight Aeolian Islands. Because the largest island is Lipari, the islands are sometimes referred to as the Lipari Islands or Lipari group.

As long as there are historical records, Stromboli has been constantly active, which makes it almost unique among the volcanoes in the world. It should be mentioned that this is regarded as surprisingly safe as well: even though there is a small risk of being involved in a sudden, larger explosion (which happen infrequently a few times per year), and then being hit, injured or killed by an ejected bomb from the crater, the risk in terms of numbers is probably much smaller than many other risks in everyday situations. The number of accidents on Stromboli, when compared to the number of visitors at the crater over the years, is extremely small. Most of its activity consists of brief and small bursts 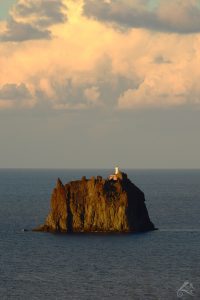 of glowing lava fragments to heights of 100-200 m above the craters. For those who know and learn to love it, Stromboli is a magical place,- even not only for its volcano, but also for its unique charm, its beautiful beaches, the lush vegetation and its characteristic and unspoiled architecture. All this said, lets go and see! 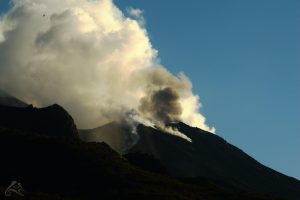 If you go to your local travel agency, asking for a romantic volcano vacation at Stromboli, the agent will end up with a weird look and big question mark face! So don’t waste your time. If you think you are smarter than running to a travel bureau, and you search on the internet for a convenient travel package to the Aeolian Islands, you are lost as well. Try! The tiny piece of lava-land is way too small for an airport. Its even too small for buses, cars, and too small for big hotels. What most people can’t possibly know (Which I didn’t either), it is way easier to get there than you think! Deeper web research shows: There are convenient flights to Catania Sicily, public buses to Messina, connecting buses to Milazzo, and ships to the Aeolian Islands, with stops on certain days at Stromboli. Ohh myyy … this sounds “really easy ..huh”. 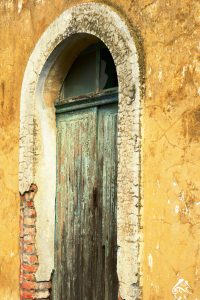 Worrying about the thousands of possibilities that can go wrong, imagining of sleeping on a hay stack next to the street after missing the last autobus connection, or overnighting on an old fish box in a rusty harbor shed, the flight to Sicily is booked. On the web portal “Tripadvisor.com”, some people where blogging about how absolutely amazing “Catania City Center Bed and Breakfast” is, and booking.com did the rest.

Two weeks later, I find myself standing at the Catania Airport arrivals gate, calling some Italian telephone number I was given from the friendly B&B owner for a “special” cab. A friendly voice answers and I receive the number Washington 323 to look for. While I am still  wondering, what this is all about, a cab pulls in right in front of me with the big letters WASHINGTON 323 at the door. The smooth ride to Catania downtown is short. The Taxi driver helps to get the luggage out of the trunk, and I am ending up in a tiny and dark downtown street in front of a huge, massive, ornamental steel gate. The buildings walls look very old, made with large natural light grey stones. No sign of any hostel at all. O’well. There I am again… just like it happens to me all the time when I travel. This must be a good sign. 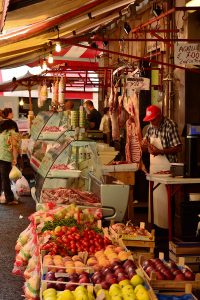 Catania City with its almost one million inhabitants is known for its seismic history as well, having been destroyed by a catastrophic earthquake in 1169, another in 1693, and several volcanic eruptions from the neighboring Mount Etna Volcano, the most violent of which was in 1669. Therefore, Mount Etna Volcano is definitely not considered as a safe “Romantic Picnic Volcano”. But this flourishing city itself has had a long and eventful history, having been founded in the 8th century BC. In 1434, it witnessed the opening of the first university in Sicily. Then in the 14th century and into the Renaissance period, Catania was one of Italy’s most important and booming cultural, artistic, and political centers.

Still searching for any sign of some Bed & Breakfast, I discover a dusty doorbell above my head. Next to one of many buttons, I can barely read: B&B. I press – and a loud clicking sound invites to push the gate open. What comes next, after thousands of stairs up, is incredible. It must have been Julius Caesar’s private vacation quarters or Medici’s Catania Summer Palast. Ornaments of Italian Renaissance and red carpets guide the way to a desk, made out of black glass. Behind the desk, a friendly receptionist is laughing “Welcome to Catania. Did you have a pleasant journey?”

The cab is waiting again in front of the ornamental steel gate – and the journey to stromboli  island continues. The bus to Messina is on time, and the 4 hours ride around the Mount Etna, through beautiful Olive Tree fields and the typical South Italy landscape feels like no-time. At the Messina bus station, the connecting bus is perfectly waiting already, and another two hours later, the fairy to stromboli leaves the 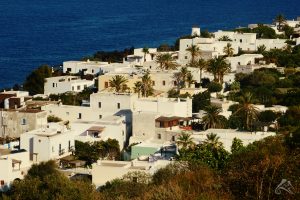 harbor. Everything was way easier than one’s ever would have imagined. No overnighting  in barns or sleeping on hay stacks. And there it is: The Volcano Island Stromboli. The smoking mountain tip appears just like being inside a fairytale. The village is small and after two days, I learn that Giovanni is the best Pizza place on the planet, how to buy incredible tasty honey, and to enjoy the freshest fish dinners possibly imaginable. 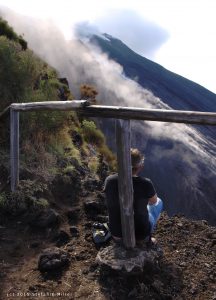 A good bottle of wine, a flashlight, the camera and good hiking shoes. The sunset Volcano romantics can begin. The red and gray lava rock paved trail starts behind the village, passes an old eighteen hundred abandoned cemetery and goes uphill soon. The light glimmering of other flashlights shine through the small pinetrees and soon, it feels like being on a evening pilgrim mission together with many other nice people. They come from Germany, Australia, France, UK and the US. Everyone has a little story. A guy from Switzerland passes, running in flip flop shoes, laughing and giggling. He does this all the time in the swiss alps, he says. Some Japanese Television guys join the group with their camera drone. It was fun. All of a sudden, there is a crackling noise like someone would unload pavement stones off his truck. A few steps further and an incredible show is presenting itself. A hill appears behind a corner where smoking and cracking lava stones running down almost all the way into the ocean. Some stones hit others, they jump into the air and spin. Sparks fly away like a spiral fireworks show. A few feet further, the continuation of the trail is closed because of high volcanic activity that day. On a small metal platform, dozens of young and old people enjoy sitting around, watching this unforgettable natural spectacle while the sun is going down behind the ocean. The sounds of small explosions, sliding stones and sparking fires mix with the clink of our wine glasses to salute. 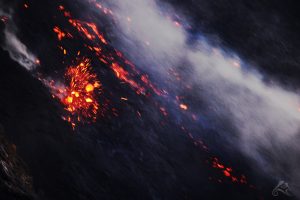 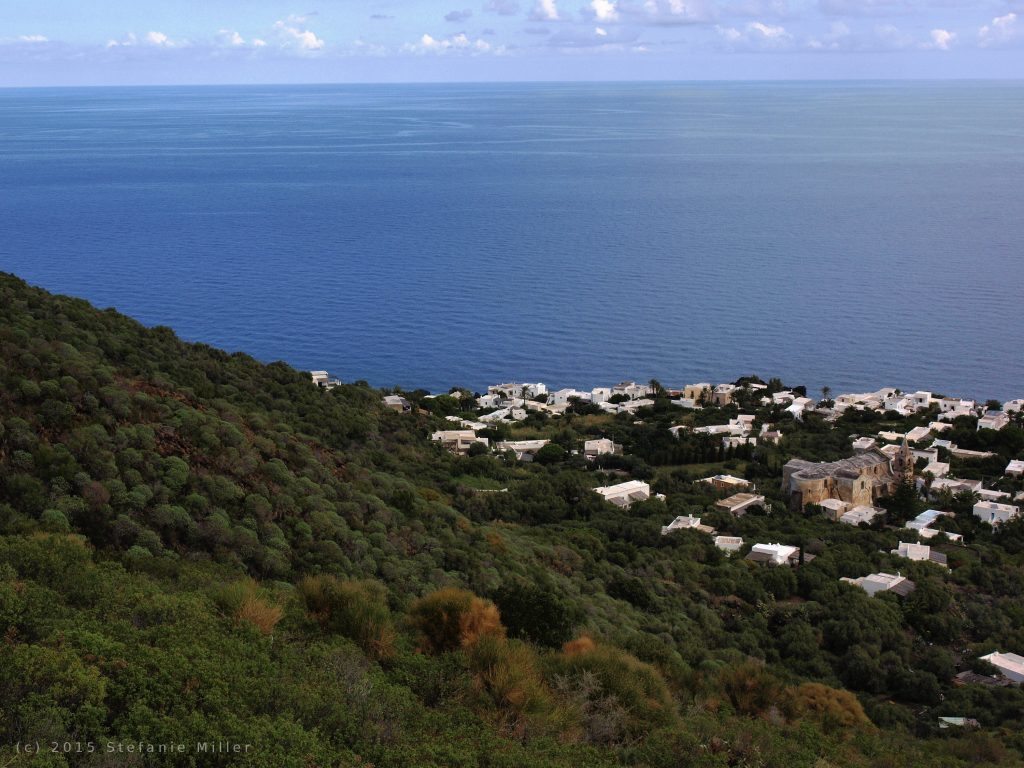 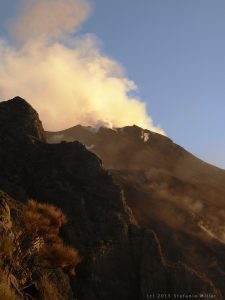 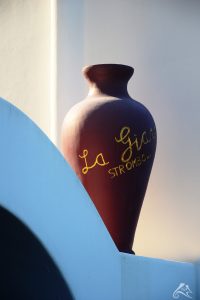 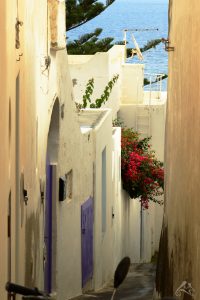 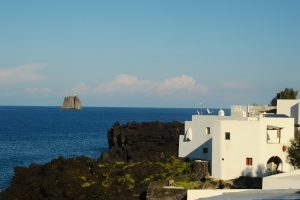 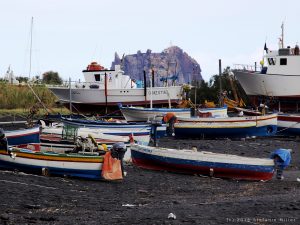 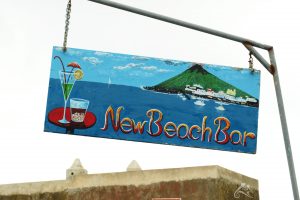 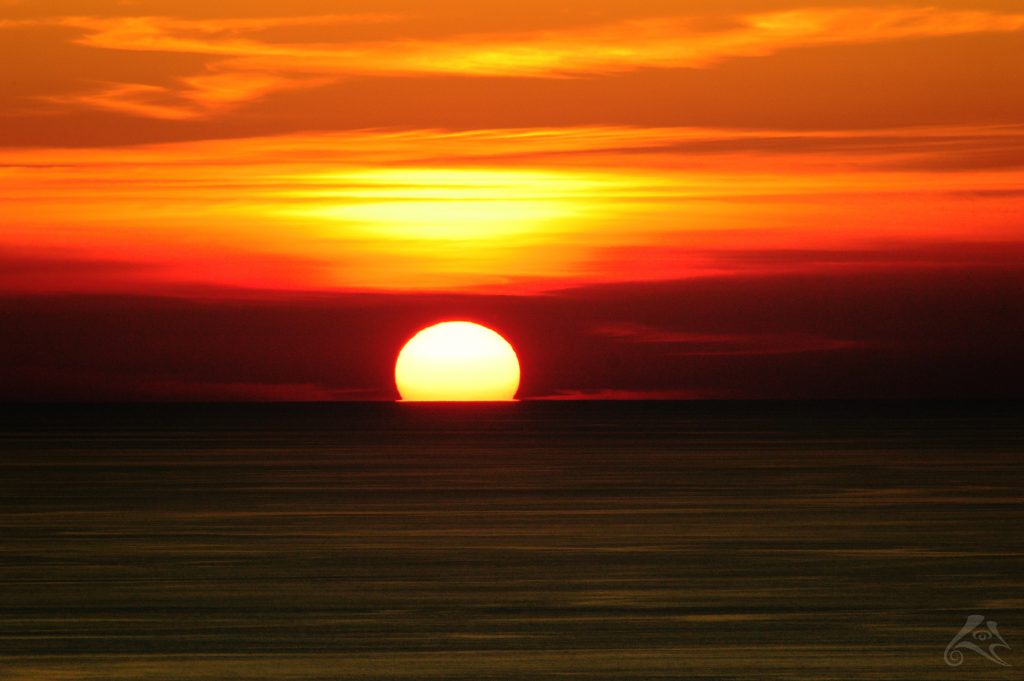 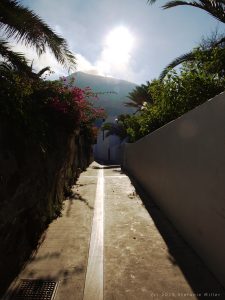 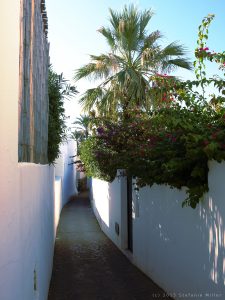