Long time ago… there was a very cool European TV-Show called “The Legend of Tim Tyler” or “The Boy Who Lost His Laugh” by German writer James Krüss. I so loved to watch this Show when I was a child! Thirteen-year-old Timm Thaler has an irresistible laugh and is thus very popular. The mysterious Baron (in the novel his last name Lefuet is a German anonym for devil, like „lived“ is in English), a grumpy and very wealthy businessman tries unsuccessfully to buy Timm’s laugh. Timm, after having lost his beloved father because of his private plane crashed (he was flight instructor), is vulnerable to the Baron. To financially support his stepmother, Timm no longer resists the Baron and swaps his laugh for the ability to win any bet he makes, no matter how absurd it is. If one of them tells about this pact, he loses his rights from the contract. The Baron and his servant Anatol use this new gift for business success. Timm however grows increasingly unhappy. He decides to get his laugh back. He tries several tricks only to realize that it takes a bet to get his laugh back.

One of the central filming locations, which look like some James Bond’s bad guys white cat movie sites, was the “Mirador del Río” as well as the artificial pool of the “Jameos del Agua” in Lanzarote, both designed by the Canaries Islands most famous artist: César Manrique.

Lanzarote was probably the first Canary Island to be settled. The Greek writers and philosophers Herodotus, Plato and Plutarch described the garden of the Hesperides, a mythic orchard at the far West of the world, which some like to identify with the Canaries. It is the easternmost of the autonomous Canary Islands, in the Atlantic Ocean, approximately 125 km off the coast of Africa. Covering over 800 square kilometers, it is the fourth largest of the islands. Lanzarote has a volcanic origin. It was born through fiery eruptions and has solidified lava streams as well as extravagant rock formations. The „Tunnel of Atlantis,“ the largest underwater volcanic tunnel in the world, is part of the Cueva de los Verdes lava tube. Since Childhood, I always wanted to see this bizarre scene shown in the TV-Show “The Legend of Tim Tyler”. When one of my best friend told me, that his sister had opened a restaurant on the island of Lanzarote, there was nothing anymore that could have possibly stop me from going there. It was Mid September 1992 when the flight was booked and my dream became true. Together with my friend, we stayed at his sister’s apartment and enjoyed a fantastic vacation. With our rented car, a VW Golf Cabriolet, we discovered every square inch of the island. Many times, we drove to Papagayo Beach, south west of Lanzarote. It was just beautiful. The sunny bright South – in contrast of the black lava beaches in the North makes this place just like a unreal fairytale island.

Twelve years later, starving for sun and ocean on one of those a grey and rainy days, I find myself on a Last-Minute-Vacation website. One of the first ads popped up like a spark. “Lanzarote – Enjoy the most beautiful island of the Canaries”. Here we go I thought and instantly booked. The flight was smooth like charme, and the rental car pickup at Arrecife Airport went without any delay. Car rentals on the Canaries are extremely cheap. You can get rates from less than 10$ a day. The apartment was in the East site of the island. It’s wild and peaceful there. Just the opposite of the South-West. Entire tourist-cities grew out of the empty amber lava stone areas there. A very nice slim, mid aged Englishman, who looked like a sunburned pirate, welcomed us with a big smile. There are so many things to see, that it’s hard to decide which place to go first. The Mirador del Rio? Or The Green Caves – Cuevas de les Verdes? Maybe The Cactus Garden – Jardin de Cactus? Or to just enjoy a dinner on the volcano, prepared on volcano heat? The English Pirate Guy started to laugh out loud when I mentioned El Diablo, the Devil’s Restaurant. “The volcano is dead since two hundred years” he smiled, “Do you believe they would risk to place a hundred people on top of a powder barrel? I don’t think so. Maybe they heat up the grill with gas!” His face looked even more red than when we arrived, perfectly matching the El Diablo conversation.

It was Saturday Morning. And I wanted to see where César Manrique lived and worked. Haria is a small village in the North Eastern part of Lanzarote. It’s beautifully surrounded by hills with palmtrees. I felt home instantly. The village has such a warm and cozy atmosphere, that I can perfectly understand Manrique, why he wanted to move here, instead of one of those spectacular villas in the South. His private house just opened for the public by the César Manrique Foundation. Everything was left the way it was. The living room with fireplace, Dining area, his well used books, bathroom and pool. A few feet away, he had his atelier as a separate building. If I would become halfway famous as Manrique, are there people walking through my home also one day? What a weird thought! 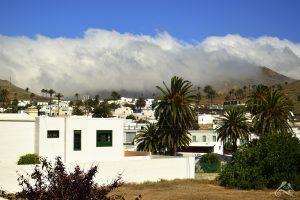 La Villa de Teguise is one of the main cultural and tourist centres on the island. One of its most popular events is the Mercadillo. Every Sunday morning, the entire village turns into a grand open air market where shoppers can browse among the stalls of wares from artifacts to homemade bread, all animated by groups of folk dancers and singers in native costume. In the afternoon, we decided to see more of César Manriques beautiful architectural work. César Manrique’s former home, built into the boulders in a lava field, is now a foundation dedicated to his life and work. The ground floor is an exhibition space with works by his renowned contemporaries, including Tàpies, Millares, Picasso and Saura. Basalt steps lead down to a turquoise pool and five lava bubbles linked by passages in the volcanic rock. On our way back, we stopped at Guatiza, located 2 km from the east coast of Lanzarote and known for its cactus garden, created by César Manrique. The village was originally located on a slope of the mountain in which the cemetery stands today. In history, the Spanish Moors Pirates sacked Guatiza homes several times in the past. This was the reason that the homes had been located in a more secure area. The surrounding around the garden is wild. Abandoned cacti fields and bizarre lava formations form a mystic scenery. I stopped the car and felt somehow drawn into this place. After a few minutes walk along lava fields, there was a white thing on the ground. From a distance, it looked like one of these Halloween Ghost Costumes. Unlike my Girlfriend, I had to get closer. But the closer we came, the more it looked like a ghost. It was a piece of fabric, probably formed by the wind. (At least that’s what we hoped). We both got a real chill and started to walk back to the car. Ghost stories, which I had been told during a vacation trip to Bali came to my mind. The Balinese Hindus always leave something they owned, wherever they went. Most likely some corns of rice. This they believe, will thank the goddess for all they receive in life. Otherwise, the goddess may take something from you! So I took my wallet and through a few coin cents into the dry lava field. My Girlfriend thought I am completely out of my mind. But somehow, I had to do this. Don’t ask why. I usually never do such stupid things. Back at the car, we wanted to leave this place as soon as possible. However – we couldn’t find the car keys! Gone! There was no other options  than to wait until somebody drives by or to walk all the way back where we went before. After half an hour waiting, we decided to take the second option. Searching every square inch of our trail with our noses almost all the way to the ground, we climbed on every rock and down every mold. Nothing! A Kingdom for a cold beer I thought. Or at least water. But the bottle was inside the locked rental car. All of a sudden, my Girlfriend who hiked a couple of meters in front of me screamed. She must have arrived at the ghosts site. And guess what? The car key was lying right next to the piece of white fabric on top of a black lava sand area. Jus t like someone would have placed it there to be found easily. We never been that ready for a serious shot of vodka that moment!

El Diablo, the volcano restaurant seemed to be the perfect place to get a good drink and to try the volcano heat grilled chicken. After fantastic drive for a mile or two through black lava fields and craters, the restaurant appears out of nowhere. When we arrived, it was already late afternoon, and most visitors left already. This is the perfect chance to sneak around a little we thought. I still had those words in my mind of our English pirate like apartment owner. What if they really cook with gas? What a discovery this would be! Hiding underneath some lava rock formation in the back of El Diablo, we were waiting until the last guest was gone. Personnel finished to clean tables, more cars left. Than silence. Now or never! We walked towards the volcano-heat grill, which is an outside area and accessible. Then we placed our hands over the hole in the ground where the heat comes out. It was still hot. Maybe not as hot as it seemed before, when the chicken breasts were on the roast an hour earlier? Hard to say. And how about the Steam holes? Maybe they cooled down a little as well? Let us leave the Myth alive! 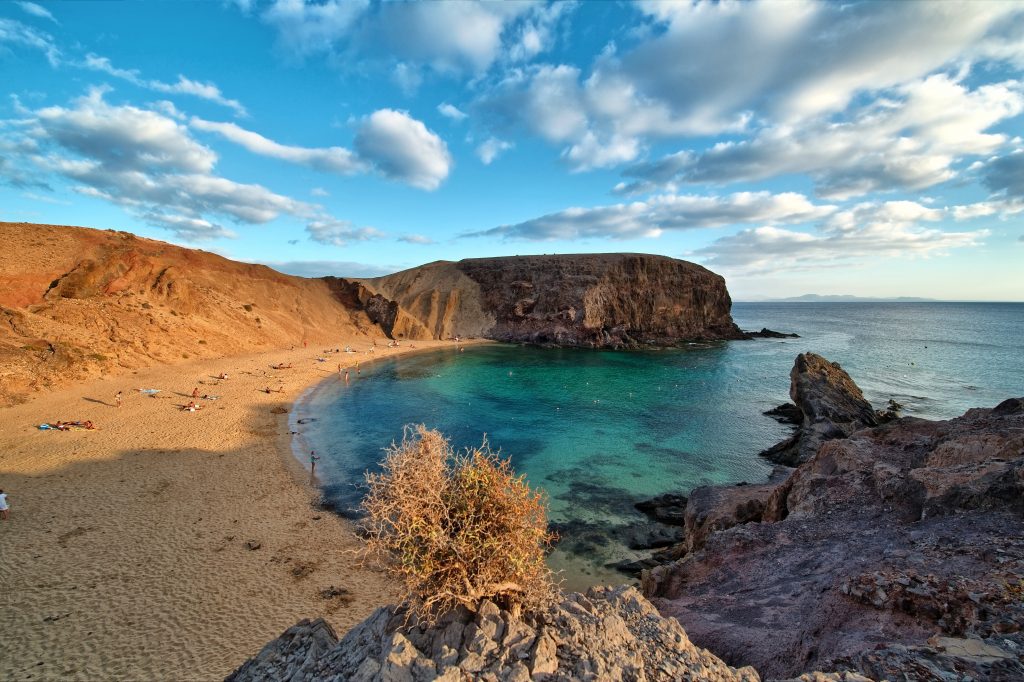 Lanzarote will always be a very special place for me. The people who live there are very friendly and welcoming. It’s homey, nice and warm with its climate never colder than 20°C. I can’t wait to be back again some day, to join the art scene and to help to continue the artistic spirit of this charming island.